File email that isn't for general viewing by staff.

Written by Reg Prentice
Updated over a week ago

Confidential email can be seen only by other project executives on that project and the individuals who were recipients of that email.
Note: the organization-level admins in TonicDM are able to see all email for every project.

1. If you have executive access to the project (as described above) you will have an option to switch conversations to Confidential when you hold the mouse over an email in the Outlook sidebar. 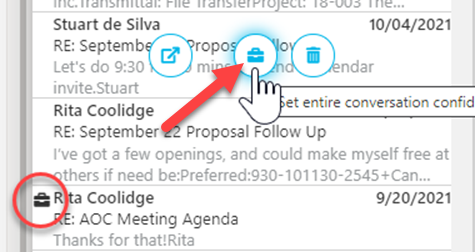 Note: Email that is Confidential is shown with the briefcase icon in the left margin.

3. If you name a folder "confidential" in Outlook, anything dropped in that folder will be set to Executive Access Only when it is filed in TonicDM. 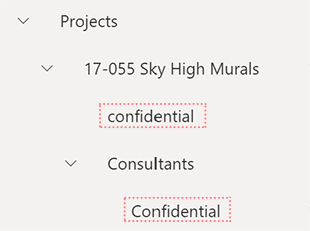 Staff in the To, From or CC of an email, plus staff with Executive Access on the project, and the TonicDM Administrators for your organization will all be able to see these emails in TonicDM.

This role-based security is works well because if the people with project executive status on a project are changed, the access to the email filed as confidential on the project automatically changes too.

Did this answer your question?